I grew up to believe in the art of the possible, and developed an attitude of ‘I can do this’ as opposed to ‘I can’t do this.’ I thought about the issue, worked out some options and maybe even tried a few. (There were parallels in the ‘military appreciation’ which was either done in the heat of battle on the back of a fag packet or more formally, taking account of all the factors and coming up with options*.) You found out what worked as, sure as eggs are eggs, something will. Recently I have come up against the insidious development of the anti-culture, of the ‘can’t do’, ‘not my problem’, here in Britain and I find it very very sad …. and actually a worrying development in a country which historically has been one for invention experiment and possibilities; now we have the art of the impossible.

Our relationship with the landlord of Amber House is now very much a working one, and we get things done. For instance, I realised that if a lightbulb in the communal lights went, it tripped the electrical circuit board and that needed to be reset. That required an electrician to be called out as the cupboard was always locked! Oh and the electrician was need to change the light bulb! So we got the system redesigned, so that a dying light bulb did not trip the system and we also got a key to the cupboard. So I thought, well, the next step is to change the offending light bulb ourselves. As it’s a communal light bulb, it’s covered by the landlord’s insurance and as I don’t work for the landlord I’m not covered. Ok! I can cope with that. “But you haven’t had ladder training.” This of course is the outcome of the Health & Safety at Work Act 1974. No doubt there was a need to tighten up some of the regulations about safety where people worked, reducing the deaths and injuries that occurred, but this ‘catch all’ act is being used to stifle our humanity. I say ‘humanity’ because, for instance, policemen have been prevented from jumping into a canal to save someone who’s fallen in …….. because it’s not part of their job, that it requires specialist training.

I explained that in 2004 I had climbed the Sydney Harbour Bridge …… and to do that you have to have, inter alia, ladder training! You are also breathalysed, have to remove anything that could be dropped or fall off, and wear a prison-style boiler suit, but I digress. Seemingly this wasn’t enough! Then a neighbour who has the same sort of attitude as me said that he, as an employee of British Telecom, had been trained to ‘climb a ladder’. I can sense you’re smiling, wondering how difficult it is to climb a ladder and you would be right. Surely the only question is: “Do I lead with my right or left foot?” So the landlord supplies me with spare light bulbs, I climb a short ladder, and we don’t call out the electrician.

I tried to get agreement from the landlord to cut the communal grass, as I think I would take more care than the contracted company, and I care. As I do not own the grass, I am not covered by the insurance and ……. can’t do it!

Now we come to what really got my goat. Living in one room, a room where we cook, eat, and relax, I suppose you could call it a ‘living room’ (!) the noise levels of domestic appliances are quite critical. The kitchen was already in place when we bought the apartment, complete with an American-style fridge freezer – with water dispenser and ice maker. I had arrived! I loved it although was a bit concerned of the noise level of the fan. Out of warranty, I had it replaced; I had it replaced 6 months later and again another six months after that – “Well, it’s not that bad and they are all like that” the engineer says as he leaves. Enough; my decibel app measures the noise as 75 db (advertised 43db!!) so the Lamona had to go. I eventually ordered a Samsung fridge freezer from Curry’s, a national retailer supplying TVs, domestic appliances, computers etc etc; Samsung have a reputation for quiet machines!! We discussed with Idis at Curry’s whether the 8 steps up to the front door of Amber House presented a problem and he said he didn’t think so but to be on the safe side he added a note to that effect – suggesting three people were needed (Note: these fridge freezers weigh about 130 kgs) I paid an extra £19.95 (why wasn’t it £20?) to have it delivered in the afternoon. 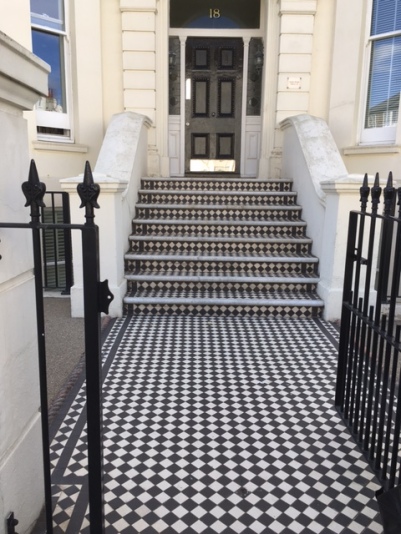 Tessellated steps up to Amber House

So I waited. The doorbell rang. Knowhow, Curry’s delivery company had arrived; a good start! But then the two guys said they didn’t know how they would get it up the steps – “Oh! Yes. The paperwork says three chaps are recommended but the manager ignored it, obviously!” “Don’t you have some tackle on your van for helping lift/manoeuvre heavy items?” I come back to my ‘can do’ attitude; if I was a delivery man I would take pride in the fact I could delivery what I have to deliver, even if it meant having gear to assist me. That saying “More than my job’s worth mate!” came to mind. But this couldn’t have been the first time? Could I help you? “Nah! mate. Not insured.” They then moved into the world of the ridiculous; they could ‘deliver’ it onto the pavement – at which point I got uncharacteristically angry and asked them to leave.

So I found a local company who were Samsung dealers – delivery is tomorrow. I showed them the photograph of the steps. “Not a problem; we’ll have enough people to do that.” (A ‘Can Do’ attitude huh?)

And then I went back to Curry’s to get a full refund; “3-5 working day, mate. (everyone seems to be ‘mate’; over-familiarity or what?). It’s the banks, innit!” To add insult to injury, Curry’s asked me to complete an online survey on ‘how we did?’ ‘How was your recent experience with Knowhow? Rate 0-10 ‘0’.’On a scale of 0-10, with 10 being fantastic, how would you rate your experience with our Knowhow delivery drivers? ‘0’. To help us improve our service proposition (what does this mean?) please could you advise us of the reason for cancelling the order? ‘You couldn’t deliver it!’

Time for tea and toast.

*For those of you with some military experience, ‘two up and bags of smoke’ often seemed to be the answer!! If, dear Reader, you have no idea what I’m scribbling about, ask me.