There are a great deal of items in the newspapers here in the UK and on the television news that makes me shout: “Really? Wow! What a surprise!”

For instance, last week some government organisation announced that the UK economy had shrunk in April by 20%. This surely is not news? When you lockdown a population and close all the shops, no one indulges in their favourite activity so there is no exchange of goods for cash and the economy suffers. Pre-school mathematics I reckon – all that QED stuff! And as if to reinforce this, when on Monday the ‘non-essential shops reopened here in the UK, there were long queues outside Primark, a cheap outlet, from 0300!!

Another issue here seems to be the completely unsubstantiated link between Covid19 and the currently installation of our 5G mobile telephone network. One is believed to cause great harm to individuals but I am not sure which way around it is. To add to the mystery, our 5G network is being built in part by Huawei a Chinese company that is rumoured to be part State owned and often accused of being a front for the CCP ……. for the conspiracy theorists this is manna from heaven …… ergo Covid19 is a state-sponsored global pandemic. For other conspiracy theorists Covid19 doesn’t even exist and all the news reports from around the world are false, or as the Brazilian President Jair Bolsonaro claims: “it’s simply a bad ‘flu”. (Some Brazilians wish he would catch it!) 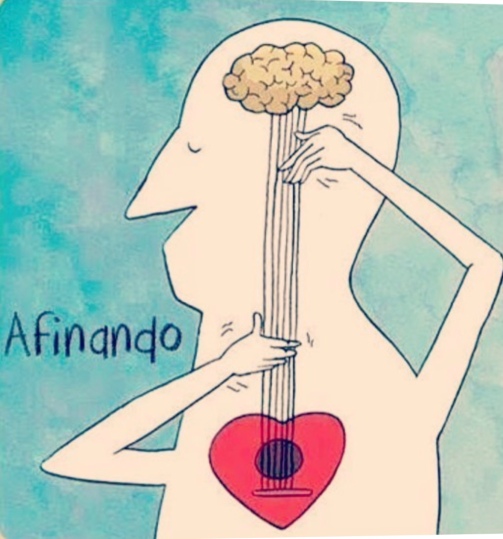 Just love this representation of being in tune – heart and head!

A twenty year old footballer Marcus Rashford, who plays for Manchester United and for England, has shamed our government into continuing to provide free meals to disadvantaged children during the coming school holidays – a bit of a misnomer this year as most children have not been in school since March. He added weight to his singled-minded campaign that children would be going hungry in poor households by recalling his own childhood when he remembers a lack of food. Some of us might argue that if you have more children that you can afford to clothe and feed this is a result; in this case his mother had five and was a ‘single mother’ – whatever you can make of this statement.

The Black Lives Matter campaign has gained a great deal of traction here and in other countries. Britain was of course a maritime nation whose ships transported black slaves from the west African coast to the Americas. This is a fact, however you look at it; we recoil in horror at the very thought of it, this trade in humans, but it took a huge effort by William Wilberforce before the British Government banned it in 1833, such were the vested interests that supported it. You could, if you wanted to, blame the slave traders for making Britain in the C21st the fattest nation in Europe, as their ships brought sugar back to Georgian England …… and so started our addiction to sweet things. Good to blame someone distant from one’s own love of sugar ie the slave traders. Of course it’s convenient to forget who brought the slaves from the African interior to the ports and sold them to the European traders and it’s convenient to believe this is a single issue between Europe and North America. Ten times as many slaves, over five million, were transported to Brazil by the Portuguese. In PC 117 I wrote about ancient and modern slavery; as sure as eggs are eggs it still exists in certain countries, in differing forms.

Even before this country got a good grip on Covid 19, the Government was being blamed for the fact that more BAME (Black, Asian and Mixed Ethnicity) people are dying of Covid19 than their statistical representation would forecast; the latter is 14% of the British population and the former 36%.   No doubt statisticians will pore over the numbers to provide some ideas where healthcare policy might lead. We already know that 50% of those who have died were obese and a similar number were diabetic; the majority are men. If there are proportionally more BAME deaths due to Coivd19 then they must be more obese ….. and this comes down to life style, traditional food choices and a whole raft of other issues you can’t legislate against. Another statistic doing the rounds is that British people of South Asian origin are more likely to die of Covid19 due to a higher-than-normal incidence of diabetes And to add to the complexity, those with A positive blood group are more likely to die than those of us who are O positive! Oh! And BAME lack vitamin D ……. so they should now all take Vitamin D supplements. In summary, if you are a man of South Asian heritage over 65, have blood group A positive, have diabetes and a BMI over 30 ….. self-isolate until the end of next year (2021)

I read that those who suspect that Covid19 is not a real pandemic are also not supporters of vaccinations and of wearing facemasks. Funny world!

Every evening on the BBC news I listen as the newscaster highlights how many people have died from Covid19 and gives us the cumulative total. What needs checking is how these figures are compiled and how accurate are they. For sure, more people have had some form of the virus than the figures reflect: my daughter and son-in-law both got it …. but not badly enough to need calling any healthcare organisation, so not being counted. And there seems to be some variation about whether the death was caused by Covid19 or whether the fact they were 94 had some bearing on it?

And this week we are told that if we for instance break an arm or a leg, before you arrive at your local hospital you need to book an X Ray!

A few weeks ago the news was drenched by the fact that our Prime Minister’s adviser Dominic Cummings had broken the lockdown rules. This was a classic case of ‘Do as I say, no it as I do’. The sadness is he would have got more credit from the chattering classes if he had simply said: “I am sorry. I will resign.” But he didn’t …… and the whole episode left us with a nasty taste in our mouths. Of course those that expressed outrage the most were not necessarily behaving as saints!!

Richard. The day after the Longest Day (Northern Hemisphere). 2020