Sometimes the drip, drip, drip of information, often in the background and not vitally important in itself, turns into a stream that deserves some attention and thought. Or you step into a puddle you hadn’t realised was there. So it is with slavery, across the centuries.

One tribe fought another and won …. and enslaved those captured.

My own knowledge of slavery is very much informed from English history. In the Domesday Book, the Norman census of 1086 stated that 10% of the population were slaves. But 800 hundred year later, public pressure, particularly from the Clapham Sect, and through the skills and persistence of William Wilberforce, brought about The Abolition of Slavery Act in 1807; further acts ensured the British Empire free by 1834.

And I knew that many individuals had made a fortune in this trade of people, as the profits were huge. British merchant ships sailed with goods to West Africa, exchanged the goods for enslaved Africans from the interior, sailed to North America where the slaves were sold, and the ships returned laden with coffee, sugar and other commodities from the West Indies. The British ports of Bristol and Liverpool were the focus for such trade.

Can you imagine being a slave? Being owned as a human being by someone else? Can you feel the shackles, real or imaginary,  around your neck and ankles? The mere idea sends shivers down my spine.

So for me ‘slavery’ was identified in those poor unfortunates taken from Africa to North America; over the years about 500,000 individuals. And I should also include those ‘transported’ to the British Colonies, firstly to the Americas and then to Australia after the American Revolution in 1776, as ‘slave labour’, for their conditions of work were hardly any different. Europeans I sense always think of this Atlantic triangle of trade as the only one, as its long-lasting legacy on the development of the United States has been fundamental.

But I write this from Brazil where it is estimated that 40% of the population is descended from slaves from Africa. Starting in the 1500s, the trade reached its peak in the early 1800s as the answer to labour shortages for the sugar and coffee plantations. Most of these people came from the Portuguese colony of Angola and from The Congo. If they didn’t die in the inhuman conditions in which they were shipped, they arrived at the Valongo Wharf in the centre of Rio. Standing at this site today creates enormous emotions; none pleasant. 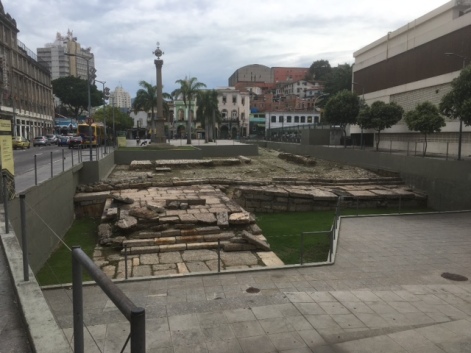 Here they were sold indirectly to the Slave Traders or directly to the plantation owners. It is estimated that between 1500 and 1870 some 5 million Africans arrived in Brazil and were sold. (That is ten times those shipped to the Americas.)

With the abolition of slavery complete in Britain in 1834, she put pressure on other countries to do the same, using her Royal Navy to intercept trading vessels and release the slaves. But the internal market in Brazil continued for another 54 years until the monarchy finally signed the law abolishing slavery. You may recall in PC 37 the fact that the bankrupt Baron San Clemente had to sell his large house in Friburgo to the Guinle Family in 1913 as, after the abolition of slavery, his plantations were unworkable, and unprofitable.

‘It is not something to be triumphant about, this ownership of another human being.’

Close by where Caio Valongo has been excavated, there is a large column bearing a statue of Visconde De Mauá, a hugely wealthy businessman, entrepreneur and politician who was a driving force for the abolition movement here. Further down the street, there’s an enormous mural by Eduardo Kobra celebrating the human race, with a representative from each of the five continents. Whilst it was painted for the Rio 2016 Olympics, its juxtaposition near Valongo can’t be ignored and I sense its powerful message reaches beyond this continent.

The last face, that of an Aborigine. The colours have faded but the symbolism is clear.

And did you really think that increasing civilisation over the centuries would have made the practice of slavery extinct? Sadly not!

In Britain in the last few years there have been a number of cases where a group of people have been subjugated and badly treated. These poor unfortunates are often badly educated, maybe immigrants who are not officially registered, falling prey to unscrupulous individuals, working at their beck and call for the roof over their head and some meagre food to keep them alive. Forced into labour, prostitution and domestic servitude, this is the face of modern slavery.

“Slavery is a weed that grows on every soil.” Edmund Burke

The ‘Modern Slavery Act 2015’ estimated that there were some 13,000 individuals living in ‘modern slavery’ in the UK. Section 71 of the Coroners and Justice Act 2009, which had come into force in 2010, created a new offence of holding another person in slavery or servitude or requiring them to perform forced or compulsory labour. In the first case brought under this act, former hospital director Saeeda Khan was convicted of trafficking a Tanzanian woman into the country to work as her domestic slave.

The Connors family made headlines in two county courts. In Luton two members were jailed for holding some 24 people against their will in filthy and cramped conditions. Some of the men, from Poland, Latvia and Lithuania had been held for up to 15 years, and others for just a few weeks. Some were British citizens. All were deemed “vulnerable” and had been recruited at soup kitchens and off the street with the promise of paid work, food and lodgings. A further five Connors were convicted of conspiracy to require a person to perform forced or compulsory labour between April 2010 and March 2011 following a three-month trial at Bristol Crown Court.

Also in October 2016, a couple who trafficked a 10-year-old girl to the UK, then repeatedly raped and kept her as a servant for nearly a decade, were jailed. Ilyas and Tallat Ashar brought the girl, who is deaf, from Pakistan and kept her at their home in Eccles, Salford, where she slept in the cellar. Judge Peter Lakin, sentencing, said the couple were “deeply unpleasant, highly manipulative and dishonest people”.

And I imagine this is simply the tip of the iceberg. The stream runs, the puddle gets deeper. When will we learn the difference between right and wrong? 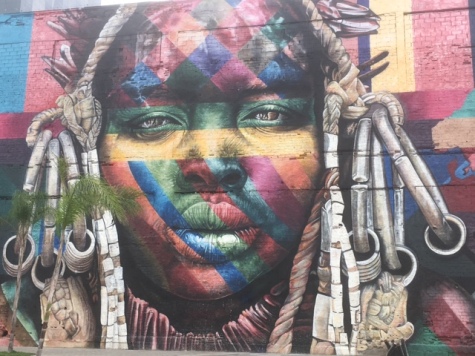