Through the window, across the road I can see the end of the largest Christian Orthodox Coptic church in the south of England. In the early evening sunlight, in the dappled shade provided by the elm tree, it looks idyllic. 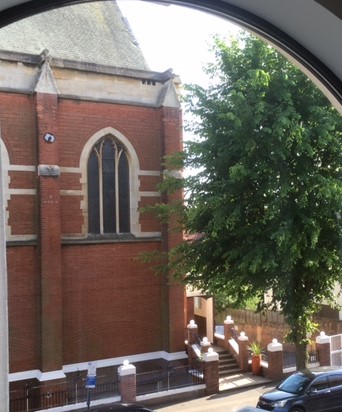 But my view is deceiving. Zoom in and it’s seen from Room 16 at the Montefiore Hospital on Davigdor Road in central Hove. This morning seems a long time ago. Theresa at the reception desk was on duty until 2100 last night and here she is at 0655 ……. after I give her my name she checks my date of birth (dob) ……. and then asks if I’m with Mr Cass (my spinal surgeon) …… and then checks the dob again.

“This can’t be right” she mutters under her breath but loud enough to hear …. I can see her confusion as she looks at me, my face belying my actual age!!

“It’s the hot yoga!” I say and she understands completely as she occasionally goes to the same studio and is also an aficionado. Up to Room 16. To get this far I had to have a meeting with Mr Cass on Monday, see my GP on Tuesday, get checked at the hospital the same day for MRSA etc, asked again about dob and next of kin, sign here, agree this;  you will no doubt be familiar with this world in some way.

You will have gathered by now the long story roughly alluded to in PC 95 had come to a head. The NHS system advised a ‘watchful and waiting’ treatment; I wanted an MRI to find why I couldn’t walk without a stick. So I had to jump the NHS as this had gone on too long and I was in too much pain. You hear that after people get unexpectedly upgraded to business or even first class on an airplane, they vow never to ‘turn left’ again …. although we do know some people who take this a rub-your-nose-in-it further with a “Oh! You fly ‘Commercial’ do you?” So into the Montefiore, a private Spire hospital for a Lumbar Microdiscectomy at L4/L5.

“There’ll be a vanity bag in the bathroom with shampoo, shower gel etc but if you need anything you only have to ask.” Ah!

After a room visit by the anesthetist, I wait; it’s 0815. Then the assistant anesthetist arrives. “Can you walk?” Up to the second floor in the lift, walk past Theatre 1 and Theatre 2, theatre reception etc; it’s so far it’s like walking from the air bridge to passport control in an airport when you arrive. You may remember that the ‘space blanket’ that was all the rage in the ’70s (a NASA benefit) that’s now ubiquitous in camping stores and in mountain rescue vehicles? Then they developed a self-heating glove ……. well, in the pre-operating room I was covered with a self -heating blanket …… wow, now that’s cool! (Sorry couldn’t resist)

We talk about this and that …. “you might feel a small prick ” …….. “Can I put this oxygen mask over your nose?” and ……… the mind just doesn’t go blank, you lose conscientious very quickly. (I write this and am reminded of that film Lucy with Scarlett Johansson and Morgan Freeman about how we only use 10% of our brain power …. when we are awake!)

I awake in Room 16 a couple of hours later; my lower legs are encased in tight anti-dvt stockings and a wrap-around pack of air pockets, fitted up to a pump which inflates/deflates the pockets every 45 seconds. The pump is noisy but my lower leg muscles get a massage! The bed is one where, with a few inadvertent touches of the control panel, you could completely disappear as the foot end comes up at the same time as the head end, and you’re bent in the middle  ….. and the panic button is for some reason just out of reach.

Gary comes in to explain the physiotherapy support programme and some immediate do’s and don’ts. Gary is the chap whose head I almost knocked off when, on my first private visit to the Radius Clinic in April, he did his initial assessment. After the history take he asked me to lie down on the couch.

“Raise your left leg.” he commanded, leaning over the table, and my body. Yoga is well known for developing joint flexibility, and being ex-army I instinctively had to lift it quickly and er sharply; nothing wishy washy here!! Caught Gary on the temple huh! He remembers!

So now this is post-op and he wants me to understand how to stand up without ripping the stitches in my back. After a few moments I’m on my pins for the first time since the anesthetist’s assistant asked me to lie on the trolley this morning; Gary’s standing beside me holding the two milk-bottle like things into which stuff occasionally dribbles from the operational area. I’ve written ‘stuff’ because I am sure no further inspection or description is necessary.

Male pride? Male stupidity? Male stubbornness? No way! “Let me try on my own.” (I should have recalled the fact that a chum, in a similar situation after a hip operation, stepped boldly forward …….. fell flat on his face, had severe delayed concussion weeks later ……. and hasn’t really been 100% right since then!) Well I didn’t fall but a quick look at Gary’s face suggested he had thought I would. So, the ‘soft shoe shuffle’ so beloved of literationalists and get to the bathroom, do what was necessary with a modicum of decency but actually more like the dance of the still-connected draining bottles ….. and reverse the process back into bed.

My nurse for the day made a fascinating comment during some banter before going for surgery. The Montefiore Hospital also shares it facilities and surgeons with the NHS in an attempt to reduce the latter’s backlog. He has observed that over the years those coming in as patients under their company health insurance cover, or ‘self-paying’ as I was, are more organised, plan the post-op support needed at home, have a more self-sufficient frame of mind and are more thoughtful than those the State is funding, who just don’t appear to think about anything they can do … expecting the State to do all their thinking for them. We need a national course in self-education, self-reliance, a weaning off, taking responsibility where possible for their own health, welfare, etc.  Rant over!

So Saturday late morning I am discharged with some painkillers and notes from the physiotherapist. “Don’t sit down for more than 15 minutes at a time. Walk as much as you can.”

There you have it, pain free after three months. Thank God I had a choice.

PS Montefiore? Obviously the ‘mountain of flowers’ but a name taken by Sephardic Jews from Morocco and Italy who excelled as diplomats and bankers.