One of the greatest expansions of ‘holiday rental space’ has come about through a company called Airbnb (such a clever name huh?). There are others but this one, started in 2008 in San Francisco and now with an annual turnover of $2.6 billion, is the sort of go-to when you need someone to stay, whether at home or overseas. Some of my readers may of course be on the other end of this, providing their accommodation for others to use. We have chums in our street who have very successfully let out their duplex to enable them to travel; this year’s renters have all been cricketers, here in Hove for the summer season of county cricket.

My daughter had jumped at the chance of a week or more in Estoril at the end of the academic year and rapidly did her research for Airbnbs within 500 m of Celina’s mother’s apartment. I should add that Celina’s brother’s apartment is below, and he has two sons, so good for all the boys to meet up occasionally. Always difficult juggling the costs versus the distance from the beach and everywhere is at its most expensive in this holiday period. Eventually they found a top floor apartment 7 minutes’ walk away on Avenida Dom Alvares Pereira, for £1400 for 11 nights. 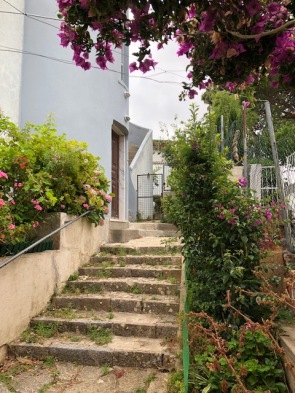 The email exchange answered her various questions and at the end of the School Year they duly picked up an early morning TAP Portugal flight from London’s Heathrow and some 4 hours later arrived in Estoril. The apartment is accessed through a little metal gate and a climb up some outside steps. It’s advertised as four bedded, one double and three singles … so for a family of two plus three boys under 8 ideal …… so why are there only four modern Ikea dining room chairs up against someone’s grandmother’s old mahogany polished table? It has that ‘clean but worn’ look, the worn look mirrored in the parquet flooring, with its glorious patina and smooth from decades of use. The sort of thing you would covet back home! 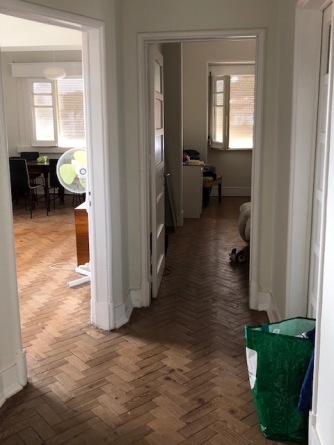 Two large windows face west and the setting sun streams in. Both opened with one of those old-fashioned central long bars with a handle; turn the handle 90° and the top and bottom slot into place –providing they haven’t been too enthusiastically painted over – nothing that a bash with a hammer didn’t fix! You might think that you would have them open in Estoril at the height of the summer but there’s often a strong onshore wind and that necessitated them closed sometimes.

The old stone chimney mantle in the kitchen now covers the gas hob, but its height, and of course the Portuguese are not famous for their tallness, is perfect for head banging. The fridge/freezer is placed against the wall in a corner; no one has bothered to change the direction in which the doors open so it’s a faff to take out, for instance, the milk. These little things!

There is an odd selection of plates, bowls and cutlery, suggesting that every now and again something gets broken and is replaced, but all miss match; doesn’t take a lot to go to Ikea and replace in sets, surely? And after two nights we took around a couple of spare mattresses as the thinness of those supplied didn’t encourage a comfortable night’s sleep. To be fair, it was very clean and did what it said on the tin. And if you have every trudged to the laundrette on holiday with a large bag of washing, you will think my daughter spoilt. There was no washing machine but yours truly picked up the bags of dirty clothes every two days…… and miraculously returned them the following day all washed and folded; ironed? No ….. too much love!

The occasional sun burn, the odd insect bite or ten (bed bugs? No!), a visit to A&E for a flare-up of an on-going burst eardrum, but all these pale into insignificance with the option of either the swimming pool or the sea. The former has inflatable rings and pump-action water guns, the latter the ability to dig a hole and wait for the tide to come in. Fortunately my techie son-in-law has a watch which does everything, from paying the bills and keeping a tally of the daily expenditure (Ed: Who would want to know?), to telling him the state of the tide. The timeless pleasure of digging a hole in the sand for the sea water to eventually fill it can be disappointing if the tide just keeps on going out!

Sometimes burying oneself and one’s brothers can be equally amusing!

The family’s only nod to culture was a train ride to Lisbon; the subsequent appraisal? “Absolutely Amazing”! To be fair I think this was probably the sights in the aquarium rather than some mouldy old ruin or the castle overlooking the city, as when you are 7 or 6 or even 3, fish can be absolutely amazing up close.

Just to the north east of the Estoril Casino is an Arts & Crafts Fair, open in the evenings in the summer months. One evening was spent drifting around, eating, drinking, staying up late! In the past I have bought two dark navy blue Hoodies here for the boys, and this year was no exception. And the youngest Theo, bless him, has to make do with hand-me-downs!

We met the mother of the owner of the Airbnb after Jade has left, returning a borrowed bowl! She spoke English fluently and one could have assumed she was English, as we have been coming to Portugal for decades; buying second homes or holidaying, particularly down south in the Algarve. But she was Portuguese and had taught English in Primary school; what better way to supplement your income than placing a few self-contained rooms on an international market place website. 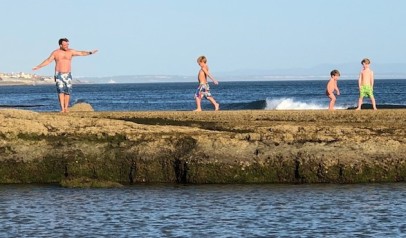 PS If you want to know more about Portugal and its people, you couldn’t go far wrong with Barry Hatton’s The Portuguese.