Out on the right hand side of England, that’s the bump on the eastern North Sea coast, lies ‘East Anglia’. The name derives from the Anglo-Saxon ‘Kingdom of East Angles’. Officially Essex in the south was the ‘Kingdom of Essex’ and so not part of East Anglia, but I suspect most of us think it’s all ‘East Anglia’.  On the south side is the estuary of the River Thames and to the north The Wash, the land here so flat that on the change of the tide the seawater rushes in at an alarming rate. History relates that King John (1199-1216) was crossing The Wash on his way from Spalding, Lincolnshire to Bishop’s Lynn in Norfolk when his staff mistimed the tide and they had to scramble to safety, losing some of the Crown Jewels in the process.

Within East Anglia the cathedral cities of Norwich, Bury St Edmunds and Ely vie for visitors with the university city of Cambridge. The Norfolk Broads, an area of navigable rivers and lakes covering some 300 sq kms, lie between Norwich and the coast. If you want to unwind and relax on the water, this is the place to go. And if you want to understand the impact of EU Fishing Policies you go to the run-down ports of Lowestoft and Great Yarmouth.

And it’s flat. Not quite as flat as Lincolnshire but flat enough for its coast to be at risk from rising sea levels. There is a belief that the landmass of Wales is rising in the west and England sinking in the east, possibly on an axis of the M1 motorway (actually I made this last bit up!). A good example of the loss of the coast is at Covehithe, six miles north of Walberswick, where some 24 acres (about 10 hectares) of farmland fall into the sea, every year! At this point you might be forgiven for thinking I’ve won an assignment from The East Anglia Tourist Board to encourage more visitors? Not true!

But we did go to Walberswick for a couple of nights after Celina’s birthday. Everyone we told immediately asked: “Where? Wallburswick?” It’s one of those delightful English village names you have never heard of and never know how to pronounce. You need to get your tongue around the letter ‘l’ before sounding the ‘ers’! 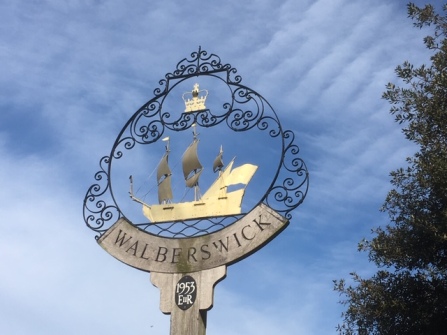 I’ve known the woman who runs The Anchor, a ‘pub with grub’, an Inn in the old-fashioned sense, for some 27 years, so it was a visit to catch up with her and her family, to walk and to enjoy the peace and quiet of this beautiful stretch of the coast. Walberswick lies just south of Southwold; the River Blyth flowing out to the sea between the two.

If you still need a geography refresher, the well-known town of Aldeborough lies to the south with Snape, the location of an international music festival started by the local composer Benjamin Britten (1913-1976) lying a few miles inland. To get there from Hove, after getting around London, you simply follow the A12 road until it almost runs out, then turn right.

The Anchor has been in Sophie and husband Mark’s hands for some 12 years; she runs the kitchens and front of house, he focuses on the range of beers and wine, about which he is extremely knowledgeable. On a busy weekend they might do 150 ‘covers’ for lunch and all their ten rooms are normally fully booked in the hectic summer periods. This year in particular, with the uncertainties about Brexit causing people to holiday in the UK (a new word: a ‘staycation’ – as in ‘stay’ at home ‘vacation’ – an ugly word if ever there was one!) they have noticed an increase in bookings. Through conversations with Sophie I know how difficult it is to recruit and retain staff although currently a number of Romanians are employed. At breakfast we chatted with Doru whose two sisters and their families had just been to stay; he looked as though he was glad to be back at work!

Wireless and internet connections were fickle at the best of times but everyone who comes here has probably come for peace and quiet and can do without for a couple of days ?? We walked and talked, walked with some chums and their dogs to Southwold; had a coffee and came back. We ate in The Anchor at lunchtime and in the evenings, the early summer log fire sending a delicious smell and warmth into the room. Eavesdropping on the other clientele, above the background murmur of congenial conversations, you could hear an amusing range of chat:

“Mum! I need help with a Physics question?” This from Sophie’s daughter Rose in the middle of her GCSE exams. “Go and ask your father ……!”

“The Bank Holiday BBQ; is that open to everyone, Harry, or do we have to book?”

“My Ceanothus is dying, Barbara” “Oh! I don’t think they last longer than 10 years!”

“I’ve just cycled to Bury St Edmunds in preparation for a 200 miler in a fortnight’s time – God! My legs are killing me. I need a pint of something cooling.”
“Coming outside for a fag Mike?”

“Can I order the battered cod and double cooked chips?”

“Harry (Ed:Sophie’s delightful son who works behind the bar) can I have another one of these?

You may be wondering at this point whether the title of this PC has any relevance. Between The Anchor and the sea is a patch of allotments. I don’t think this is a particularly English thing, but for those who haven’t heard of the word, individuals rent, are ‘allotted’, small plots of council-owned land on which to cultivate flowers, fruit and vegetables for their own use. Sophie’s plot is about 30m by 15m and she grows as many vegetables as she can, all for use in The Anchor kitchen. She proudly showed me the seeds beginning to show, the runner bean canes and where the rows of courgettes will come up; with a delightful take on the phrase ‘Carbon Neutral’ said: “Last year we had enough courgettes from here to be ‘courgette-neutral’ for a few weeks.” So all the courgettes they used in the pub for those weeks came from her allotment; a delightfully modern country description – must be a postcard title I thought!

PS Look them up at http://www.anchoratwalberswick.com and go and stay!

One thought on “PC 153 Courgette-Neutral?”