On a visit to Estoril last month there was a need to travel into Lisbon by car. It’s not far along the toll motorway; you just have to be careful to get off at the right exit. Our destination was a lawyers’ office in the Chiado district, which lies to the west of central Baixa, home to all the cafes, shops and restaurants along Rua Augusta that make the city a tourist hotspot all year around. 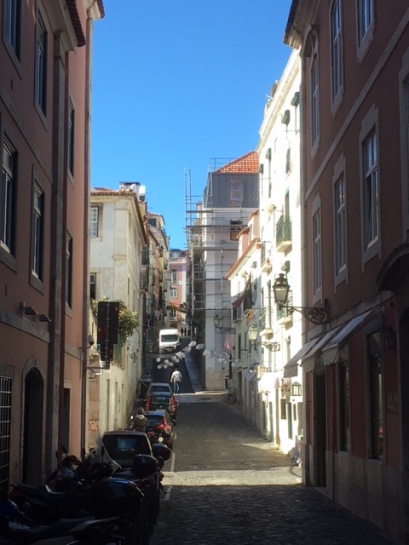 The streets are narrow and where traffic is permitted congested. Some, thankfully, have become pedestrianized, for you take your life into your hands when walking in areas where lorries, cars, taxis and people jostle for space. The Portuguese are not renown for their driving skills so you just need to think that every driver is a manic …… and then you might survive. On Madeira, the Portuguese Atlantic island 1000 kms to the south west of Lisbon, they think that the ‘pedestrian crossing’ was designed to focus the drivers on how many people they could maim! And if you have ever tried to cross on a Madeiran pedestrian crossing, you’ll know what I mean.

I wandered off with Maria, my sister-in-law’s temporary carer, for a coffee. Up on Rua Garrett is a locally famous café, A Brasileira do Chiado, a busy place mid-morning. Opened in 1905 it maintains its Art Deco interior with mirrors, paintings and wooden panels. All the outside tables were taken by the well-heeled tourists from Germany and Italy – you can tell by their chic dress sense with its abundant fur and leather – basking in the quite strong autumnal sun and by those Portuguese who want to smoke, for smoking here is quite normal and acceptable. To keep them company on a permanent basis is a bronze statue of Fernando Pessoa, a famous turn-of-the-century poet who for some reason wrote under four different names and in four distinct styles. Its shoulders gleam from the cleaning effect of thousands of brushing hands from passers-by, presumably believing that a simple touch will imbue them with some artistic ability! We all do it, don’t we? “The Conversation between Franklin D Roosevelt and Winston Churchill” piece on Bond Street London is another example. The space in the middle is a completely different colour, shined by thousands of people’s bodies sitting down …. to join in the conversation?” 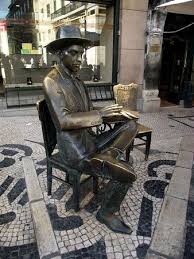 Inside the cafe with its long bar, it’s dark and rather airless but the coffee, when it eventually arrives, is strong and the obligatory Pastel de Nata quite good, although they’re better if they are slightly warm. The sugar sachet has a quotation by Fernando Pessoa: “A renúncia é a libertação, não querer é poder.” My rough translation would be “The act of giving up one’s claim (to something) is liberating, not wanting (something) is powerful.” After our fix, we welcome the fresh air as we wander 50 metres west into the next square.

At the time, I didn’t have my guide book with me and was initially unable to identify the man whose bronze statue dominates the square. From its base I read it’s of the poet Luis de Camoes, erected in 1867 and surrounded by eight smaller statues of other personalities from Portuguese literature. Mermaids and ships have been recreated in the surrounding cobblestones, reflecting Camoes epic poem The Lusiads. Further research reveals that Camoes is considered by the Portuguese to be on a par with our very own William Shakespeare. The Lusiads charts the voyage of Vasco da Gama to India and subsequent events and legends in Portuguese history. His poem was published in 1572 but only later was recognised as the work of a master. Camoes died at 54 unnoticed and unloved. 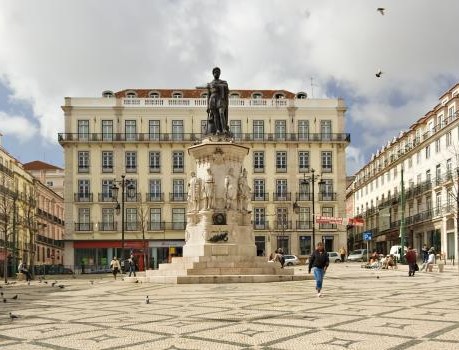 You walk on the sunny side of the cobbled pavements at this time of year, grateful for the warmth on your back, just as in the summer you walk in the shade, grateful for some respite from the burning sun. Further up a side street was another square, another church, another statue, this one of Padre António Vieira – a ‘Jesuit, preacher, priest, politician and diplomat’. Apparently he clashed with those Catholic zealots pursuing the aims of the Inquisition ie burning heretics in Lisbon’s Terreiro do Paco to ensure religious conformity, over his support for Christianised Jews. He fled to Brazil and died in San Salvador da Bahia in 1697 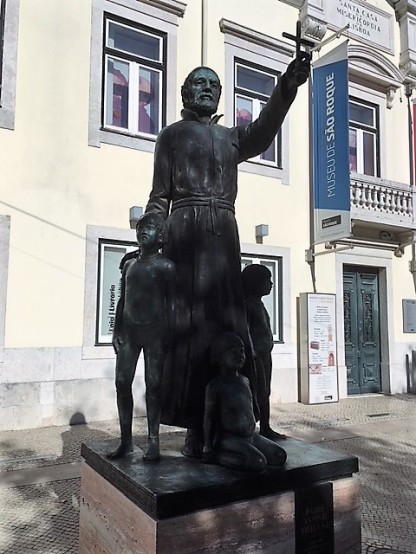 On the way back to meet up for lunch we drift into A Vida Portuguesa, a chain of shops promoting the porcelain, tiles, fabrics for which the country is rightly famous. This one is in Rua Ivens. There is a particular yellow, a sort of light Dijon Mustard quite popular at the moment and I spy a whole stack of plates, mugs and dishes. Five minutes later, a salad bowl safely inside some bubble-wrap, we make our way back to join the others.

We have lunch in what might have been described as a pop-up restaurant, rather scruffy and ‘making do’, although with reasonable food. Actually I think this one popped up twenty years ago! We wander back to the car for our return journey but our way is blocked – down the street someone has parked ‘for a few moments’ convenient for them but no one else. A traffic policewoman is awaiting the driver’s return. So we reverse and try our luck down a narrow alley. Fortunately the SatNav is as confused as we are so we are spared the ‘recalculating’ comment in that saccharine tone that makes you want to scream! Gradually we find our way back to the motorway and to Estoril.